Tracy Chou, Software Engineer at Pinterest has become a leading voice for women in the tech industry by using data to call attention to how few of them are employed as engineers. She has uploaded a spreadsheet (https://github.com/triketora/women-in-software-eng), that companies can use to make public the number of female engineers in their ranks. The goal: to identify the scope of the problem as a first step toward making a stronger commitment to address it.

I used the data to create some visualizations. 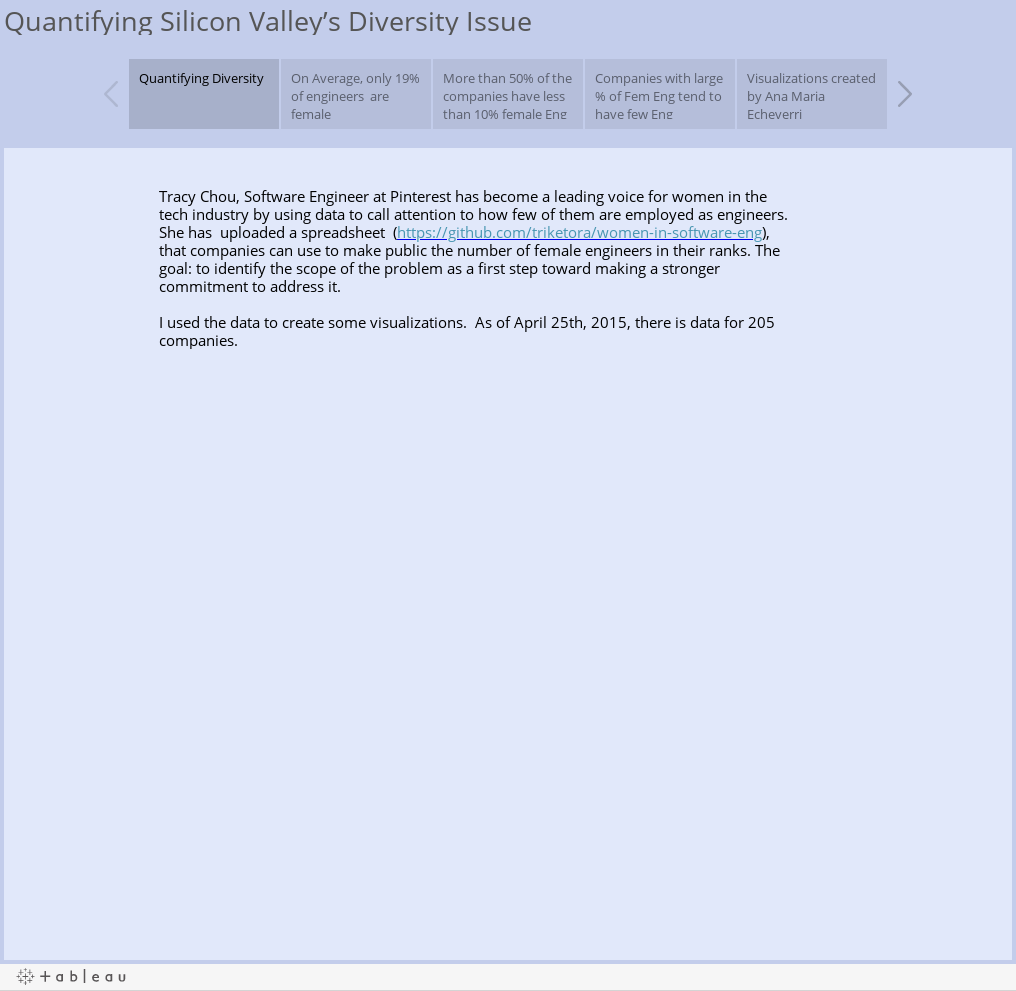 If I had to think of a perfect field for a woman, Computer Science would have to be it. It not only offers some of the highest incomes but also the most flexibility, which is… the holly grail of a professional woman.  It provides the skills to get a highly paying good job, but most importantly – in my opinion – it also provides the skills to go out into the world and create… new products, new businesses, while possibly even changing the world in the process. Yet, women are not gravitating to it. In fact:

Some research indicates Computer Science has a public image problem. Others indicate the lack of role models plays a part. After all how many of us grow up around women scientists or engineers?  That is why, initiatives like Girls Who Code will slowly start making a difference in the degree of adoption of technology skills by women as well as in their career choices.  But it is interesting to see other sources of inspiration. And it turns out TV shows like CSI, or Bones are beginning to have an impact too. In fact, the most common career aspiration named on Girls Who Code applications is forensic science. And this is relevant because in general there is very low representation of women in engineering positions in TV show and movies. The ratio of men to women in those jobs is 14.25 to 1 in family films and 5.4 to 1 in prime time. While all these initiatives are relevant, there is one area that is lagging behind, and it is our education system overall.  Most elementary and public schools don’t teach computer science, and the few that do usually only teach how to use technology (creating a PowerPoint presentation, say) rather than how to create it.  So what is a parent to do to motivate our daughters and even our sons to learn programming skills? we cannot rely on our school system. We have to explore organizations such as Girls who Code and others to ensure our kids do not become the illiterates of the future.